The newly consecrated and first Bishop Robert Miranda wanted with great enthusiasm to have a Catholic presence at Chincholi in the diocese. He invited (FMM) the sisters of Franciscan Missionaries of Mary.  Accordingly Sr Maria Pinto along with her group landed in Chincholi in the year 2006. To begin with they stayed in a small rented house. They took keen interest to study the place and contacted various group of people and built up good rapport with many people. Fr. Ambrose from Sedam and Fr Stephan from Talmadgi were attending spiritual needs of the Sisters.

Rev Fr Harry D’ Souza joined Chincholi Mission in 2007. He too started the mission work staying in a rented house. Both Fr. Harry and Sisters made good study of the place and people. They also contacted local leaders, people, pastors of the different sects, officials of the different departments.

Fr Harry D’ Souza had decided to have faith formation in CHANDAPUR village where the church is situated at present. He found many local pastors of different sects such as Pentecost Believers church, Protestant; New Apostolic and so on.  They had their own groups having few families. Apart from these, there were also Christians who did not belong to any groups. People on the fence.

Thereafter, Fr Harry and his group moved to the neighboring villages Mogha, Shadipur, Polakpalli, Anwar, and other villages.  There also they found different sects have their own influence with regard to faith.

They found Chincholi Taluka was the least developed Taluka of Gulbarga district. Poverty, illiteracy, unemployment, alcoholism, transport facility, bonded labor system, caste system were prevailing in the society. Looking at the situation, the missionaries in Chincholi decided to help the people through the social and developmental programs of Seva Sangam, The Diocesan Sociel Wing.

The alcoholic addicts people were given lot of attention. Their houses were visited and given counseling. The addicts to alcohol  were sent to the de addiction camps. In order to give the importance to the education of children non-formal education was imparted for the children. Spoken English classes for the youth, tuition for school going children, tailoring and embroidering for girls and other job oriented skills were taught for the youth. This selfless service made tremendous impact on the people who were taken up the service rendered by the church.

Chincholi is drought area always with scarcity of rain fall. In order to preserve water  a water shed program was taken up in Empally village in the year 2006. They were given an orientation for the better use of water resource.  Many camps were conducted to various self-help groups.   Further the missionaries  thought to have a water tank for the people at the locality they lived. So with the help of German sponsors a bore-well was grilled in the year 2008 and the water facility was given to the people at Chandapur . All the villagers were grateful for the good work done by the Church.

in order to make the catholic presence more fruitful and relevant at Chandapur,  Rev Fr Harry D’ Souza decided to start the Education ministry. Within a few months of his arrival he bought a piece of land in the year 2007.

In the year 2008 by the help of Pontifical Society of Propagation of Faith at Rome, Missionary of Childhood Association, St Antonius Parish Germany and others, Fr Harry put up a school building, started Kindergarten and First standard under the patronage of Little Flower. Further every year according to the need the school building was extended. Today we have 1 toVIII with a total strength of 516 ( in 2017-18) students.

For the residence of Priest a Presbytery was put up in the year 2009. Many donor helped in for the completion of this house. They are Kirrche-in-not (Germany), Pontifical society of propagation of faith at Rome and the Diocese of Mangalore.

There were only three Catholic families at Chincholi. On  Sunday service some Catholic who Stay and work in the cement factory, school at the vicinity of Chincholi also started attending weekly mass. The new Church building was inaugurated on 22 October 2011. At present Catholics, some Hindus, Christians of other denomination too attend  the Sunday service.

Marian Grotto: In order promote devotion to Mother Mary, a Marian Grotto was built in the year 2012. Mr Oliver Mark D’ Souza from Mangalore in his loving memory of his parents donated the Grotto.

The parish priests who served the mission at Chincholi are

PRATHYASHA – A Centre of Hope is the initiative of Franciscan Sisters of Mary at Chincholi Taluk, Gulberga District which was started in 2006.

There was no catholic presence in Chincholi taluk.  A few prayer groups and Protestants groups were existing in the surrounding areas.  At the initial stage, Sr. Maria pinto and Sr. Smitha D’Souza rented a small room in a SC Colony and adopted to the life style of the people. All people, especially those poor  Schedule Caste felt free to visit them. The sisters shared meals with them, and they too shared their meals with sisters. Keeping St. Francis as the model, they too stood in a line for collecting water, ration etc.  They began their mission with door to door visit, being with the people,  listening to their problems worries.  As days passed, they were able to build a lot of confidence among the people of Chincholi. But the Upper Caste people kept them slaves aloof, since the sisters were living among the dalits.  Sisters did not want to exclude anyone. They continued their efforts and started to mix with high caste people and began to experience a gradual change among them. Through familiar ways of meeting people, they were able to create the ground to take up the various programs.

The main aim was to promote value based and dignified life for all specially to women, youth and children who are vulnerable/ marginalized/oppressed. Ever since its inception, Prathyasha has expanded its developmental and empowerment initiatives for the poor especially women, children and youth in the areas of Integrated Child Development Services, Health and Sanitation, differently abled persons, Self-help Groups, Skill Training for the Youth, Women Empowerment Programs, , Promotion of Ecology, 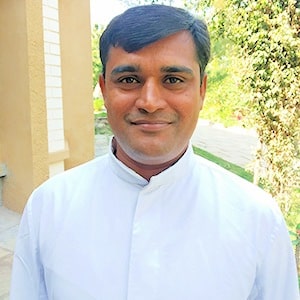 Gulbarga Diocesan Education Society organised Finale of the Pratibhasiri 2019 (Diocesan Level Inter-School Competition) on 10th August 2019 at The St. Mary School Ground, Kotnoor. 19 Schools selected for the finales for the Indoor and Outdoor Competition participated . Bishop inaugurated the competition  along with other dignitaries lighting the torch and thereafter handing over to the […]