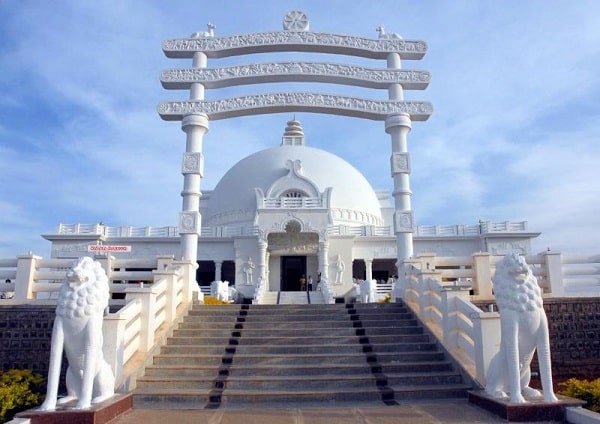 Buddha Vihar is located in Gulbarga on a sprawling 70 acre land. It is the nations largest and one of its kind. It is adjoining the Gulbarga University in the city outskirts.It is built by the Siddartha Vihar Trust at a cost of more than Rs 8 crore, is considered to be one of the biggest in the entire South India.
Nearly 1,500 tonnes of cement, 250 tonnes of steel, 5 lakh bricks and 200 cubic metres of sand have been converted by artisans and craftsmen into this beautiful structure that is built. The main structure stands on 32,450 sq ft of land on 170 pillars with 284 blocks. Each one of these reflect the Ajanta and Ellora sculptures and art.
The ground and first floors of the vihar have the sanctum sanctorum where two exquisitely carved idols of Lord Buddha are installed. A six-foot idol of Lord Buddha carved from glossy, black stone sculptured by sculptor Ashoka Gudikara of Bidadi in Ramanagaram district is installed in the ground floor. Buddha Vihar will be one of its kind spiritual centre in the country. The building will be a symbol of ancient history and social movements in the region. It serves as a great tribute to Buddha,Basava and Ambedker,who struggled and dedicated their lives for the needy in the society.
It is not only a great tourist centre and also a centre of creativity and research.This is centre is doing a lot of research on Buddhism.
The beautifully sculpted panchloha idol with a gold coating is the biggest of its kind in South India. A gold-plated smiling idol of Lord Buddha along with his favourite disciples, Anand and Kashyap, has been brought here from Bangkok,and it was brought to India in 2004.
The intricately carved doors in rosewood and teakwood are designed by artisan Kaiser Ali, connected with the royal family of Mysore.The complex consists of a museum, where another idol of Lord Buddha is installed, an auditorium, guesthouses, and a dining hall.
harana Basaveshwara Temple is an ancient temple located in the ancient town of Gulbarga (Kalburgi- the stony land).  The temple is dedicated to Shri Sharana Basaveshwara who was an eminent teacher, philosopher and a saint in the Hindu religion. 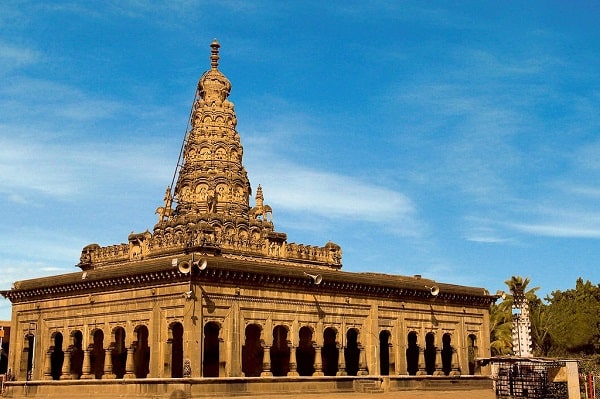 Shri Sharana Basaveshwara was a Lingayath Saint renowned for his Kayak and Dasoha. Dasoha meant Charity. According to Lingayath Dasoha meant that one must work hard selflessly and work for the society. Whatever belonged to the society must go to the society without any discrimination. Kayaka in Lingayath religion meant the removal of inequalities in anything like religion, spiritual, social as well as economic.
The temple of Sharana Basveshwara holds the Samadhi of the saint in the garbha gudi. The temple has a picturesque lake in the proximity. The overall splendid surrounding enthralls visitors and devotees.
Architecture of Sharana Basaveshwara Temple: The temple has a marvelous structure, which dates to 12th century. The carving contains images of Garuda, parrots, flowers and elephants. The temple is also known as Sabhamandapa. The temple consists of around 36 arches and numerous pillars that add to the beauty of the temple. The temple is a blend of Mugal as well as Hindu architecture.  The temple was constructed almost two centuries ago. The panchaloha kalasha which is a combination of five metals can be found here. Later during the Mughal empire, the Nizam of Hyderabad conquered the temple. The Sabhamantapa and the pradakshinapatha are some marvelous constructions found here. The intricate work that is carved out in the pillars and walls are indeed the prominent feature of the temple.  The peacock carvings are the striking ones among the figurines. The Peetha must accredit the seven peethadipatis. The entangled serpents sculpture also adds to the elegance of the temple. There is various artist’s depiction of Sri Sharana Basaveshwara on the walls.  The interior is lavishly decorated with gold and glass mirrors and the roofs are decked up with chandlers which depict the Nizami style. Sharana Basaveshwara Temple, Gulbarga. Image courtesy Manjunath Doddamani Gajendragad
Mythology of Sharana Basaveshwara Temple: The parents of Sharana Basaveshwara Sangamma and Malakkappa were the role model for his choice of his path to break the feudalism in the society. He wanted to serve mankind and preached what he performed. He was a great contributor to the society. He wanted to eliminate inequality and bring out the best to the society. After he passed away, in his memory a shrine was built up with a Mahadasoha Peetha. The Peetha currently supports many educational institutions.
Significance of Sharana Basaveshwara Temple: Devotees come to the temple to seek blessings and fulfillment of their wishes like pursuing good education etc.
Jatra: The annual fair conducted in the fame of Sharana Basaveshwara is an added attraction of the temple. The jatra is to commemorate the death anniversary of the Saint. He was renowned for his great works in social reformations. The festival witnessed a large crowd gathering in the temple to offer their homage on the Samadhi of Sri Sharana Basaveshwara. The devotees also perform padayatra from their villages to the temple as a form of devotion to the saint.
On this occasion, the grand silver plate which is the Prasada Batla is brought out and public get a view of it. The occasion also lets the devotees can look at the Linga Sajjike which is the cover used to hold the Linga made of sandalwood.  The people of Sharanabasweshara offer their portion of harvest on special occasions as an offering. The temple also conducts a cattle fair every year. 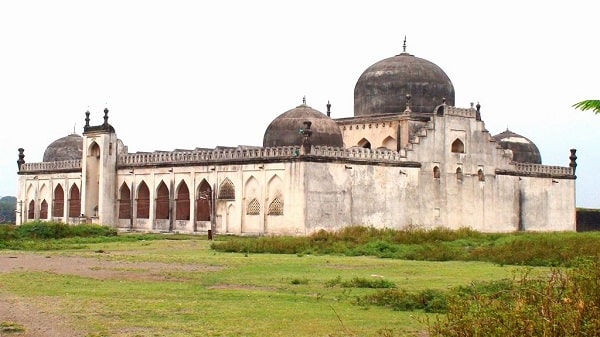 Jama Masjid Gulbarga is Mosque located in Gulbarga City, Karnataka, India. It is regarded as one of the most architectural mosques in its form and structure in South Asia. The arches design of Jama Masjid Gulbarga reflects in the interiors of Spanish Mosque of Hyderabad, India. These are only two mosques in India which have the similarity in interiors of the Great Cathedral–Mosque of Córdoba in Spain. Jama Masjid Gulbarga was built by Muhammad Shah I (r. 1358-75) to commemorate Gulbarga as the capital of the Bahmani Sultanate. The Bahmani dynasty was founded by Ala al-Din Hasan Bahman Shah, a Bahmin’s servant at the court of Muhammad bin Tughluq. The Bahmanids established themselves in Gulbarga once the Delhi Sultanate began losing its hold. 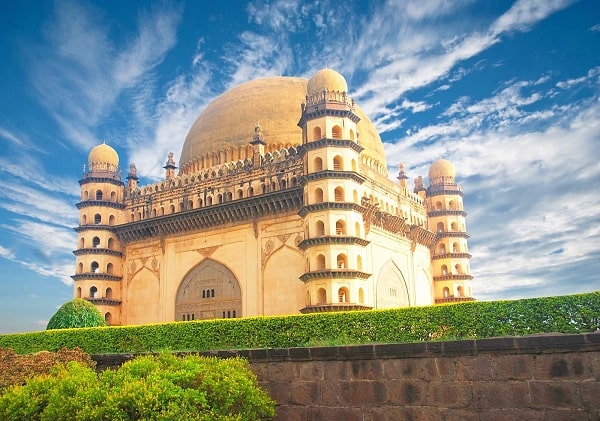 Mohammed Adil shah started construction of his own tomb to bury his mortal remains right after his ascent to the throne in 1626. Mohammed Adil shah intended to build for himself a mausoleum comparable and possibly grander in scale than the Ibrahim Rauza, the tomb of his father, Ibrahim Adil Shah II. The composition and ornamentation of the Ibrahim Rauza is exceptionally intricate and beautiful. Going for size, the Gol Gumbaz was planned as a mammoth single chamber structure and remains one of the biggest in the world till date. The construction of the tomb continued throughout Mohammed Adil Shah’s regime but could not be executed to full extent due to the sudden demise of the Sultan in 1656. Buried along with the Sultan are his two wives, Taj Jahan Begum and Aroos Bibi, his mistress Rambha, his daughter and his grandson.

Design, Architecture & Structure: The Gol Gumbaz, also known as Gol Gumbadh, was designed by an architect named Yaqut of Dabul. Dabul, also known as Dabhol, is a small seaport town in Ratnagiri District, Maharashtra, India. The mausoleum has been built in dark grey Basalt stone and the facade is decorated with plaster. It is cohabited in a complex with other structures like a dharamshala (a simple inn), a mosque and other buildings along with a beautiful, well-maintained garden.
The architectural style of the building is Deccan Indo-Islamic which is a perfect confluence of Indo-Islamic and Dravidian architecture. Deccan rulers produced an independent style of their own, largely ignoring the locally predominant architectural styles and, were primarily influenced by the Persian and Mughal architectural nuances. The tomb is a giant cube topped with a hemispherical dome. The entire structure is fitted on a 600 feet podium. The dome is the second largest in the world, with a diameter of almost 600 feet, next only to St. Peter’s Basillica in Rome. It is one of the largest single structure chambers in the world, and the space it encloses (almost 1700 sq.meters) is the largest in the world covered by a single dome. Beautiful petals covering the drum are carved at its base. Staircases in the walls of the main building lead to the seven-story octagonal tower at each of the four corners. Each story has seven arched windows and all are capped by smaller domes. The seven floors of the towers are demarcated by a projecting cornice and a row of arched openings marking each level. A broad eighth story gallery, accessible by winding staircases in the four towers, circles the dome and hangs out at around 3.3 m. This gallery is an acoustic marvel and is called the “Whispering Gallery”. A commendable piece of civil engineering, this amazing echo system reflects any sound for over eleven times. It has been designed in such a way that one can even hear the faintest tick of a watch across a distance of about 37 meters within the vast dome. The foundation of the tomb is constructed to rest on the bedrock which was presumed to prevent any unequal settlement. Unique architectural characteristic of the structure is the use of pendentives (groined compartments) to counteract the outer thrust of the dome and has not been used anywhere else in India. Use of such ingenious structures indicates the sophistication of the architecture of the period. The pendentives have a large central arch, topped by a cornice of grey basalt further crowned by a row of small arches carrying a second line of plain work holding a balustrade of 1.8 mheight over it.
The inscriptions over the south and main archway mention the date of Muhammad Adil Shah’s death as 4 November 1656. A ‘bijlipathar’ hangs over the main entrance. It is a meteorite that had fallen during the Sultan’s rule and is believed to protect the stone from lightning. The main mausoleum hall houses a square podium with steps on all four sides. In the middle is the cenotaph, marked by an elaborate wooden baldachin, the exact location of the grave of the Sultan is indicated. A Nakkar Khana or the music gallery lies to the south side, unfinished, as the minars were never extended above the roofline. It is now houses a museum. 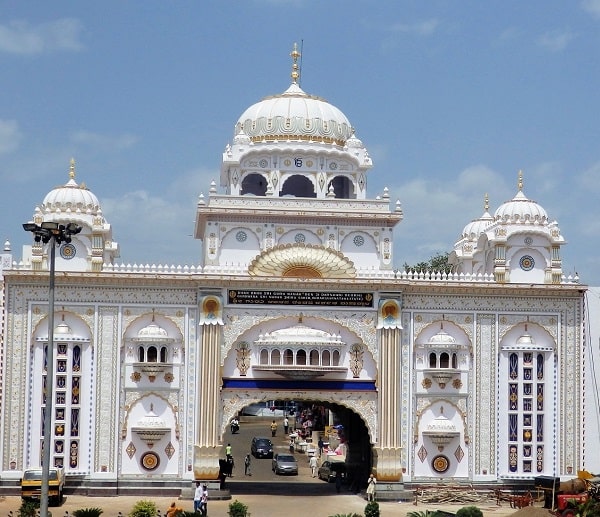 Guru Nanak Dev ji accompanied by his disciple Mardana stayed in the outskirts of the Bidar town .In the nearby were huts of Muslim fakirs, who took keen interest in the sermons and teachings of the great Guru. The news soon spread throughout Bidar and its surrounding areas about the holy Saint of the North and large number of people started coming to him to have his “Darshan” and seek his blessings. There used to be acute shortage of drinking water in Bidar. All efforts of the people to dig wells were of no avail. Even where the wells were dug the water was found to be unfit for drinking. Guruji was greatly moved by the miserable condition of the people. With divine name on his lips and the mercy in his heart he touched the hillside with his toe and removed some rubble from the place. To the utter surprise of all, fountain of sweet, cool water gushed out of the hillside. The place soon came to be known as ‘Nanak-Jhira’. Birthday of Guru Nanak Dev ji and Hola Mohalla festival attract large number of devotees from all over India and Bhai Sahib Singh one of the Panj Piaras (five beloved of Guru Gobind Singh) hailed from Bidar. Guru Sahib Singh, the fifth beloved disciple of Guru Gobind Singhji hailed from Bidar.