Shorapur is also known as “SURAPURA”  Sura= God and Pura= town it means  “God’s Town” . It is a small town in Yadgir district. And it is also one of the taluka, surrounded by several villages. It is about 50 k.m. from Yadgir and 105 km  from Gulbarga city. Shorapur is an example of God’s wonderful ways  of making known His message of love to people of all faith and all Christian denominations. The mission which was started 43 years ago, has seen great progress and is showing good signs of being established as a full- fledged centre.

A brief history and milestones of the mission :

Shorapur/ surpur was one of the substations under the Hire-Naganur parish, which was belonging to Diocese of Bellary. Under the guidance of Late Bishop Ambrose yeddanapalli, Rev. Fr. Thambiraj M.A. took initiative to broaden the Naganur mission till Shorapur in the year 1972. After his transfer, the following priests served in this surpur mission. Fr. Michael Halliday OFM, Fr. Anthony Puthenkalam, Fr. Augustine Kandathil, Fr. Herald Sequeira, Fr. Lourdu Marianna, Fr. Philip c. and Fr. Gnana Prakasham T.  Mr. Balappa Doddamani (PSI, Shorapur) S/o Pavadappa Doddamani who hailed from Guledagudde Parish, had taken keen interest to take care of the priests with much respect and honour, and also he used to provide meal and residence in his own house.

Rev. Fr. Gnanaprakasham was the pioneer of this mission. Who came down from Hire-Naganur to Shorapur to nurture the faith of this people. Who had the tender faith in the Lord. (I cor.3:1-2) As he started his mission, he had no residence to stay and place for prayer; But after much struggle, he got a residence at Shorapur, on 29/11/1995; by the help of  Mr. Balappa Doddamani (P.S.I.  Surpur).

Fr. Gnanaprakasham  built a small chapel with tin shed just above the presbytery with the help of our Christian local people also help from other people, (hindu and muslim). The size of the chapel was 30×15=450 sq.ft

By staying in this residence he started mission at Shahapur town and conducted retreat in open Govt. High school ground for all the people. Br. T.K. George, was the preacher. Mr. Papachan helped financially for this great task.   Also visited Laxampur, Vajjala, Kachakanur, Geddalamari.

Rev. Fr. Antony Fernandes was the successor of Fr. Gnanaprakasham. Who made

Shahapur as independent mission station and purchased new land, built beautiful church also school. He welcomed Ursuline sisters for the surpur mission, in the year 2001, Rev. Sr. Petronila was the first sister who became the mother for all the faithful, helped the people grow spiritually. Sr. Christine, Sr. Apoline Cordeiro, Sr. Cynthia D’mello, who served in this mission in later years.

Fr. Cyril Lasrado, was the successor of Fr. Antony Fernandes belong to diocese of Bellary, who came to Shahapur on 29th  May 2005. Remaining at Shahapur he developed the school, also the spiritual need of the people at Shahapur as well as in Shorapur. In 2006 Sr. Blanche started school by name Prerana pre-primary school. In Shorapur town, in their own given residence. In 2008, The school and sisters residence shifted to Kumbarpet. As the new diocese erected in the year 2005, Fr. Cyril Lasrado was opted for  ten years to the  new diocese of Gulbarga,

He was transferred to Shorapur, making Shorapur a main mission station  on 30th May 2009. In the beginning of the year at shorapur he started visiting the families, and finding out the lost sheep to bring back to the flock. New Church construction work was started by him in 2010, laid foundation on 20th June 2010 by Most Rev. Dr. Robert Michael Miranda, Bishop Of Gulbarga, In the 2011 he started one more substation mission  centre at Hebbal K. Purchased 2.28 acres of land started school. He was visiting Catholic families at Vajjala, Kachakanur . The new church came to completion on 14/12/2014. With much struggle and pain.  At Present Fr. Steven Vegas is the director

Various activities taken –up in this Surapur mission 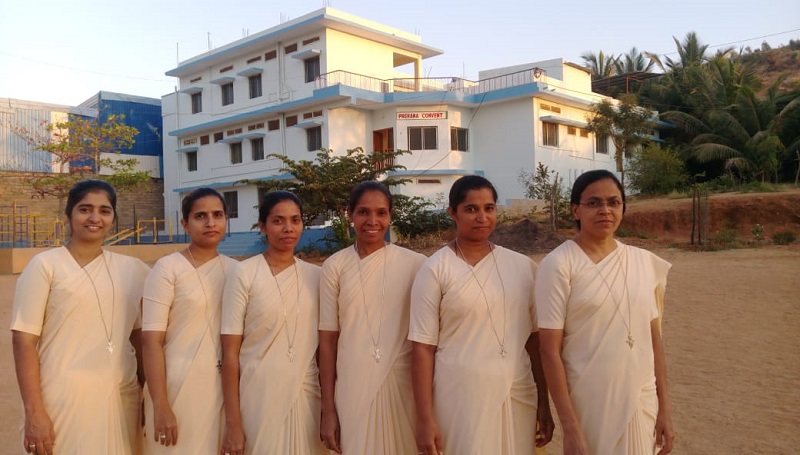 “The future is not tomorrow, it is today. Each steady step we take and each good deed we do today creates a grand history and forms a better future. The great thing in the world is not so much where we stand but in what direction we are journeying. Look to the future, where the spirit is sending you in order to do the great thing.”       At the request of Fr Antony Fernandes, the parish priest of our lady of Rosary church and the late Bishop Joseph D’silva of Bellary Diocese., the sisters of the Mysore Province moved into North Karnataka. Having studied carefully the scope for mission work according to the Ursuline Franciscan charism, the provincial Superior, Sr Jyothi Fernandes accepted the invitation, on June 16, 2001. Sisters Patronilla D’silva and Janitha Rodrigues arrived at Shorapur.

As in several other cases, in Shorapur too, the sisters had no residence of their own, hence they were put-up in the parochial house. In 2002 Sr. Mary Bastin Pinto academically with a masters in social work, was posted to Shorapur.Later Srs. Florence Sequeira and Susheela F began residing in a room of the parish church. Gradually 1.32 acres of land was bought byMysore Province at kumbarpet on October 22, 2004.officially the school was inaugurated at shorapur in 2006 starting with LKG and UKG with 28 students.

Sr. Blanch D’souza was appointed head teacher.Since the classrooms were inequipped, classes were conducted in the residence of the sisters. On March 23, 2007 the foundation was laid for the school at kumbarpet in the newly purchased land, the basement and first floor was completed on august 12, 2007.and blessed by Bishop Robert Miranda. On December 31, 2007 classes were shifted from Shorapur to kumbarpet.

The new convent building Prerana the social center and children’s home were blessed on their completion of August 24, 2010.Along with education and social and pastrol activities being carried out with vision to empower the people –women and 58 children in particular. For the past  years, the Prerana School has become of light the children around the school. In Prerana School there are 1150 students studying from LKG to 9th Std and there are 12 children in Prerana children’s home.

The Ursuline Franciscan sisters began our mission in Shorapur in the year 2001 with faith formation, through regular house visits specially the catholic families, family prayers and SCC. Gradually they began visiting villages where theyfound physically challenged children who were in need of assistance.  They brought them to their house, sent them to the school and were taken care by the sisters. They continued our visits to the village and started the social apostolate. Theirour involvement in the social apostolate they and the people felt the need of qualitative and value based integrated education. Hence a primary school was started in the year 2007. 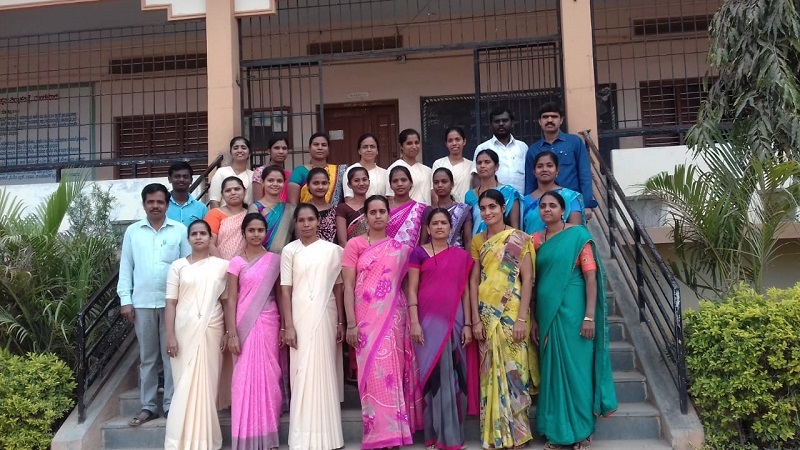 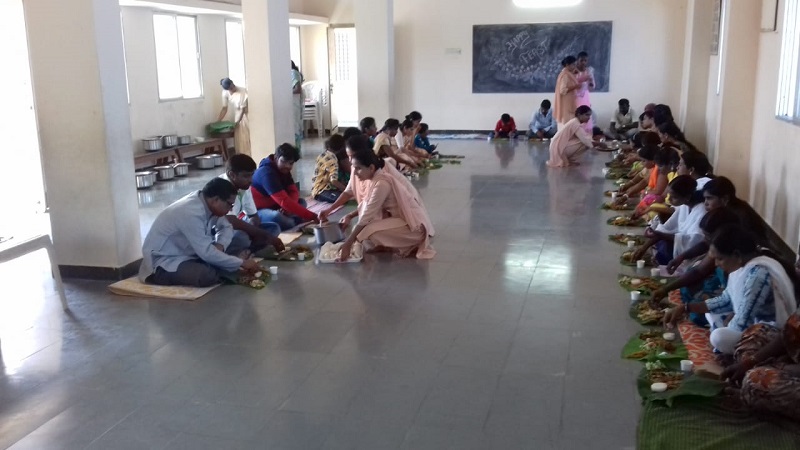 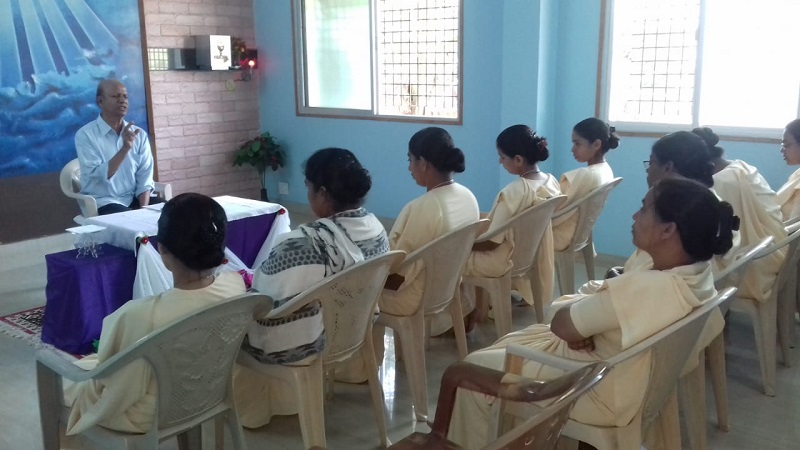 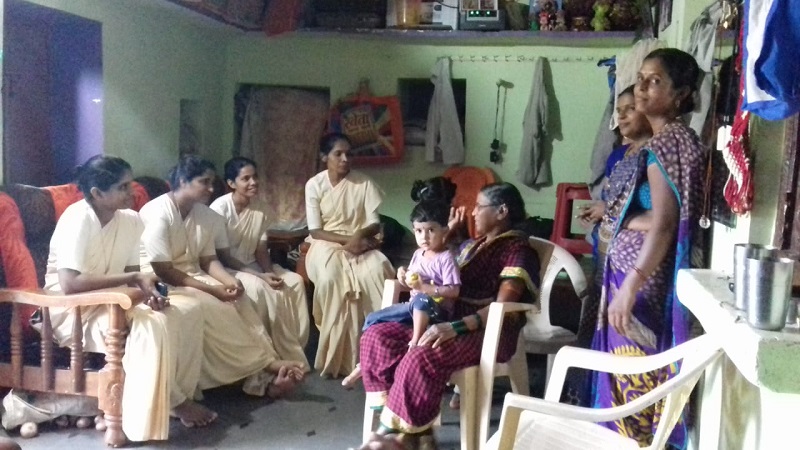 There are 33 self help groups and 10 children groups which are active: at present social works are dying off due to inefficient persons to carry on the work.

In order to improve the standard of education in the year 2015-16, Bp. Robert Miranda, the President of the institute and the Bishop of Gulbarga diocese had a dialogue with Sr. Mariate, the Provincial of the Bethany congregation. Sr. Mariate then consulted her councilors and agreed to send two sisters, namely Sr. Rita Monteiro and Sr. Prema to the institute. These two sisters came to Surpur on 9th June, 2015 and began to render their selfless service to the little children. Sr. Rita though was retired, and suffering from ill health, took up the charge as the H.M of the school. She was very kind and loving towards the children. Specially she gave special attention and coaching classes to the weak and the poor children.  Even Sr. Prema too was very much loving and caring towards the children. These two sisters worked day and night giving themselves wholly for the well-being of the children. We always remain grateful to the service which they are rendering towards the poor and the weak in the society. 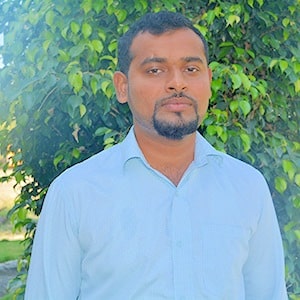 The Sisters of Bethany is completing 100 years of their existence in the Service of the Lord.

‘The congregation of the Sisters of the Little Flower of Bethany’ is completing 100 years walking in the footsteps of Jesus.  It was founded on July 16, 1921, at Bendur, Mangalore by  Rev Fr Raymond Francis Camillus (R F C) Mascarenhas, of the diocese of Mangalore. Bethany Sisters from then have grown immensely into a […]

The newly built Bethany Convent at Hebbal was inaugurated and blessed on 3rd July 2020 by Most Rev. Robert Miranda, Bishop of Gulbarga. Bishop presided over the Eucharist and proclaimed the Word of God. Bishop expressed his gratitude to Bethany Sisters for their missionary work at Hebbal. Fr Steven Veigas was thanked for his untiring service […]