The evangelization work in Ujani village, which is 15 kilometers away from Santhpur, was started in the year 1995 by Fr Elias D’Souza the assistant at Santhpur with the help of Mr Samuel of Gudpally village with the four villages attached to Ujini, New centre ( Sub-centre) , viz, Gudpally, Nagur M, Sunkanal and Ujini.  The need of making Ujini as a sub-centre was felt due to the distance from Santhpur, and to give focused attention for the faith formation and development activities in these villages.

Following Fr Elias, Bro. Stephen and Fr Peter Aranha served here in the year 1997.  The other lay evangelizers who joined hands with Fr Elias were Mr Maruthi, and the Village leaders       Mr. Havappa & Yeshappa.  The sisters, belonging to the SRA community, who were responsible for the faith formation and development of the people at Ujini were Srs. Blaise, Daphne, Leena, Saroj and Rajani.  After catechizing   for about 3 years, the people at Ujini were received into catholic faith in the year 1997.  At present there are 212 families (which are clustered in 59 houses) with a total population of about 1306 Catholics.

Yesu Kristalaya at Ujini was formally started as a sub-centre of Santpur mission in Bidar district in the year 1997.  A small chapel just enough to hold a 100 people for worship was put up for the purpose of celebrating Eucharist.  The church building “Yesu Kristalaya” was inaugurated on 29-08-1999 by Bishop Aloysius Paul D’Souza. On 12th September 1999 the center was formally erected by handing over the record books, vestements by Fr Harold Pereira, the Director of Santhpur mission to Fr Albert Crasta in the presence of V. Rev. Robert Michael Miranda, the Episcopal Vicar for Bidar Mission.  Fr Albert Crasta was the pioneer to stay in this new mission along with Bro Harry and they selflessly served these villages. The SRA sisters from Santhpur also extended their help in the new mission.  The new presbytery (the priests residence) “Sanjeevana” was inaugurated on  4th July 2001 and the entrance tower was inaugurated on 11th November 2002 by Bishop Aloysius Paul D’Souza.  Premanjali High School, run by the sisters belonging to the Congregation of Queen of the Apostles (SRA) was started in the year 2004 in order to provide quality education to the children of the locality and surrounding villages.  In order to provide boarding facility to the deserving catholic children from the villages, Jnanadeepa studuy Home was started in the church premises. The new school building situated close to the Church was inaugurated on 25th March 2006 by their Provincial Superior Sr Maria Goretti SRA. Premanjali Study Home for girls was also started in the convent premises.

In order to foster devotion to Blessed Virgin Mary, a beautiful Grotto was constructed with the support of Mr Mark Oliver D’Souza from Bajpe, a devotee of Mother Mary.  The construction work began on 24th July 2014 and completed on 31st July 2015.  It was inaugurated by Most Rev. Dr Robert M Miranda, the Bishop of Gulbarga on feast of Assumption of Our Lady on 15th August 2015.

The Church is situated right in the midst of a big village, caters to the people in other villages.  Though people of other religions predominantly inhabit the village, The parish had made significant impact upon everyone and is one of the fastest growing parishes in the diocese.  The parish has shown signs of model parish in the area for the following reasons:

Fr Albert, the first director of the mission, had developed close contact with all the people in the area.  People of all religion still cherish his leadership.  Following him, Fr Cyril lobo and Fr. Jagadish worked hard building the people of God. The present director Fr. Sunil Andrade with his team members, is making sincere efforts to unite all Christians and making strong in faith.

Various programs held in the Centre:

» Summer Camp for the Children

» Excursions  for the Children and youth

» Cricket matches and other games competitions

» Trainings to the Parish Pastoral council

» Use of Toilet (awareness) and Toilet facility  in every house (Successful)

» All land documents are in the name of the Church.

All these go on to show that Ujini Parish is a cradle of Christian faith and it has great potential to carry forward the evangelization work to its full potential in the days to come. 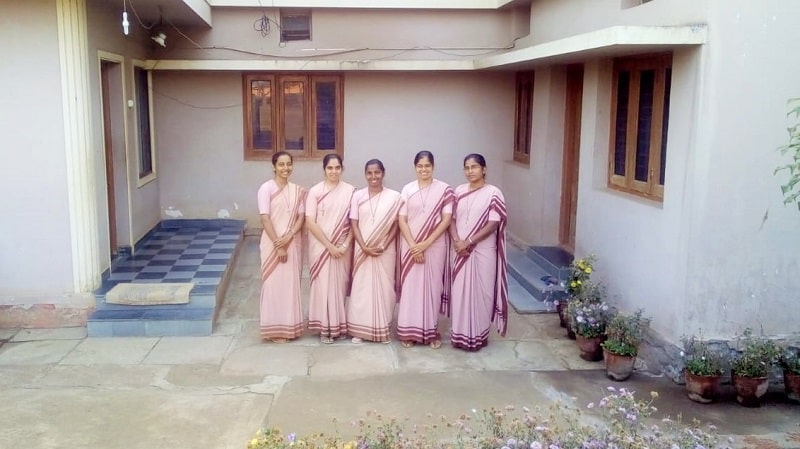 ‘’Hope is the key that can open doors to the new view. With hope we can see the bright star in the darkest of skies’’.

The missionary Sisters of the Queen of the Apostles (S.R.A.) started mission centre in Ujani village of Aurad Taluka in the year of 2003. Aurad Taluka is a back ward area in Bidar District. Ujani is a remote place. In order to bring new hope in the life of these people Sr. Maria Goretti took the drastic step to render service at Ujini village.

Premanjali Convent Ujini started on 7th June 2003. Ujini was earlier the substation of Santhpur mission. Since it is 15.k.m. away from Santhpur and it was difficult to manage, the Episcopal Vicar Rev. Fr. Robert Miranda requested the Provincial Sr. Maria Goretti to begin the mission centre at Ujini. Since there was no house Fr. Albert Crasta, the director of Ujini Mission  gave the accommodation in the church sacristy. The first pioneers were Sr. Ezilda , Sr. Sylvi , Sr. Kavitha and Sr. Ancilla. The successive superiors are Sr. Ezilda (2003-2006) Sr.Shalini(2006-2009) Sr. Ezilda (2009-2012) and Sr. Sandeepa. (2012-2015) Sr.Archana(2015 – ).  On 19th May 2004   the foundation for convent was laid. 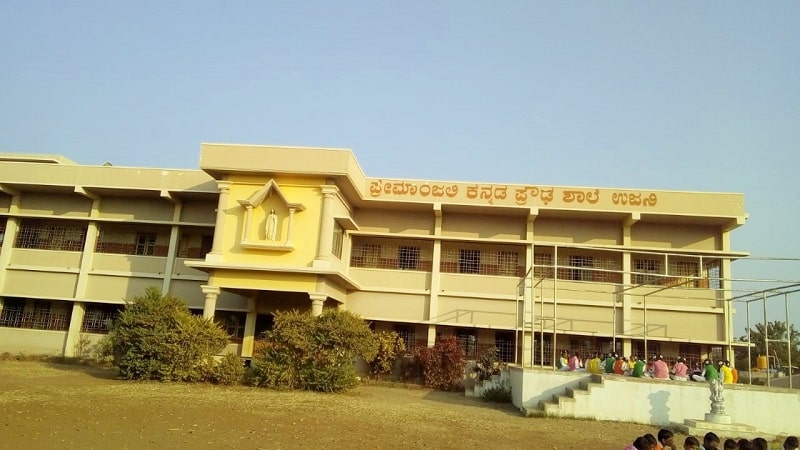 According to the need of the people and support of the Parish Priest, on 1stJune 2004 the school from 8th Standard, was started in the parish hall by Sr. Joel, the Correspondent and the first Headmistress Sr. Adrian (2004-2006)along with the staff members Mr. Krishnamoorthi, Naik, Govind Kamble and others  worked very hard for the betterment of the School. Thereafter Sr. Shalini (2006-2009), Sr. Vanditha (2009) were the Head Mistress. Sr Archana joined in 2015. At present the school has 165 Students.

At Ujaini, the girl child was often becoming the victim of early marriages and they were deprived of education. They were kept back at home to look after their siblings and for house hold work. To provide them quality education along with moral values, hostel, facility for girls was started. In 2006, the Premanjali study Home was started . Since the building was under construction, 28 boarders were accommodated in the school hall. On 15th June 2007, the boarding girls were shifted to the newly built boarding. Sr. Prashanthi  SRA takes care of these  girls as the  Animator.

The Milestone that we were able to achieve  :

A lot of improvement has been noted in the attitude of people and the children. There is a need to still work hard towards their development. People are in their shallow faith and also division is found among themselves. The people show interest towards their growth. On the whole satisfaction is felt in the mission work. 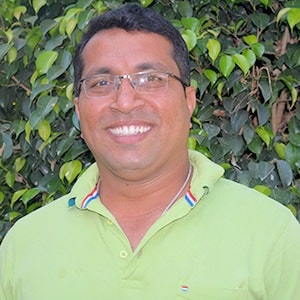 Aurad Zone organized a two day Zonal Youth Gathering for the youth of Santhpur, Ujini and Ekamba centers on 18 and 19 October, 2021. About 120 youth from Ujini and Santhpur participated in the programme. The programme began with the Eucharistic Adoration, which was animated  by Fr Vincent Pereira and team. Mr. Emmanuel S/o Nagappa […]

Independence Day was celebrated at the Bidar District Jail  and Sub Jail at Aurad by  the CRI members of Bidar Deanery along with the members of Prison Ministry India . Short Cultural programme and outdoor games were conducted and eatables were distributed to the inmates. The prison inmates were happy and remained grateful.

The members of ICYM unit, Ujini under the leadership and guidance of Fr. Sunil Andrade organised green grow campus by planning various saplings in the curch campus on 5th August.

“They have washed their roves and made them white in the blood of the Lamb”. Rev 7:14. Kristashrama, Kaudiayal, The Gulbarga Diocesan retreat centre, organised the monthly retreat on the theme Precious Blood of Jesus on 1 -3 July. Most Rev. Robert Miranda, the Bishop of Gulbarga offered the Inaugural Mass. Br. Ignatius and Team, Shimogga helped at […]